Kell’s parents were part of a group known as the Banff Street Baddies in their Clear Lake, Houston neighborhood and he grew up entertaining right along with them.

For almost all of his adult life, he has worked in a wide range of hospitality industry positions – initially in California, managing Kelly’s Coffee & Fudge Factory’s and working alongside Tim Castle as a coffee sample roaster (preparing beans from around the world for customers including Starbucks, Peet’s, & Coffee Bean and Tea Leaf), to making ice cream with Amy’s of Austin, TX.

He began cooking with an apprenticeship through the US Department of Labor and has since featured as a Ritz-Carlton pastry chef in Pentagon City, a site chef for A Catered Affair in Washington, DC, and as the executive chef of the Old Hagatna Grill in Guam, the 29 Palms Marine Base in California and the Bear Town Bistro in North Carolina.

Prior to coming to Bainbridge, Kell spent three years exploring Spain by bike, tasting fresh fruit from the tree, and touring bodegas by the week on an extensive vino and wine tasting tour.

Rivers is a recovering military brat who was stationed all around the world, most memorably in Southern Spain – a home which gave her both an authentic lisp and a love of feria.

She spends her time away from Pegasus artistically, making and reading her own custom tarot cards (with designs based on her family and her life), and writing reams and reams of prolific poetry.

Rivers is the shortest of the short-order cooks, but also one of the best. She sometimes gets a little lonely working back in the kitchen, so please take a moment to say hello to her over the Pegaus swinging saloon doors behind the bar… 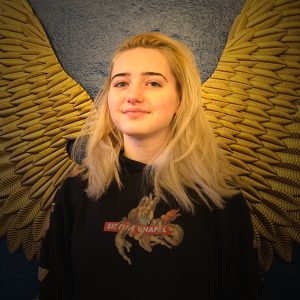 Frances was born and raised in the culinary world – picking up new skills all the way from the Mojave Desert to El Puerto de Santa Maria and back.

Currently a full-time student who bakes croissants as a constructive escape from scholastic life, Frances is happiest covered in flour and surrounded by pastries.

She came to Bainbridge with her family in 2016 and is now the precocious wunderkind of the Pegasus team, fearlessly cooking, baking, and wrestling 200 lbs of pressure to bring you your favorite espresso. 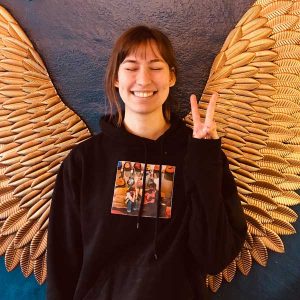 Mira thinks she’s an escaped pirate and that Pegasus is her pirate ship. When she’s not lost in a fantasy she loves baking French macarons, surprising customers with coffee art, singing,and writing.

Originally from all over the place, including Maine, Austria, California, and Kansas she loves latte art and talking about everything under the sun. Come down to Pegasus and find out what she might create for you. Maybe a turtle in a top hat floating on your latte or just a good laugh
<3 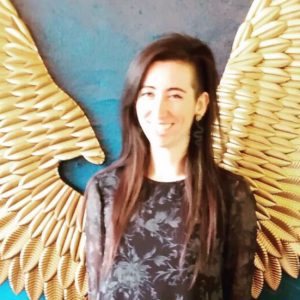 Bri grew up in the pacific northwest south of Seattle and found herself on this weird island by moving into a cluster of cabins with her eccentric friend group. She’s passionate about building community in a number of different ways and places, but has found recently that she loves to connect through music. You can find her at the espresso machine, playing her Jazzmaster and singing moody songs at Pegasus on the weekends, or maybe on an email thread messaging you back about your own desire to play a gig there.

When Bri’s not at Pegasus she’s taking care of little kids, hanging upside down from aerial silks in the city, playing board games with friends, or practicing Qi Gong in her little house.

Antonio comes from Spain, with a couple of stops in London and Portland.

You will find him at the espresso machine working on your latte, in the kitchen working on your yummy farmers market omelette or chicken and waffles, or crafting the traditional Spanish sangria that live music attendees love.

Outside of Pegasus he loves taking pictures (look at his t-shirt!), exploring new hikes, and looking for treasures for his multiple collections. Mendo, his cat, adopted him. Also, he’s married.

Jared was born in Poulsbo and raised in San Diego. His hobbies include music, art, table top (playing a dragonborn warlock right now!), and collecting bobble-heads. Jared is the person behind so many of our fun specials, wielding a spatula in the cooking storm as our resident sauce wizard.

Watch out! He will make a pun at any given opportunity. Some people dare to call him Jaweird.

Want to join Team Pegasus? Come on in and talk to Kell,
or apply right now online…